Donald Trump meets Kim Jong Un in Singapore. During the talks, the DPRK chairman confirmed his readiness for the denuclearization of the Korean Peninsula, while the US president agreed to provide the DPRK with “security guarantees.” Trump was very pleased with the outcome of the summit, but experts believe that North Korea received more than the United States as a result. Gazeta.Ru followed the course of the historic event online. 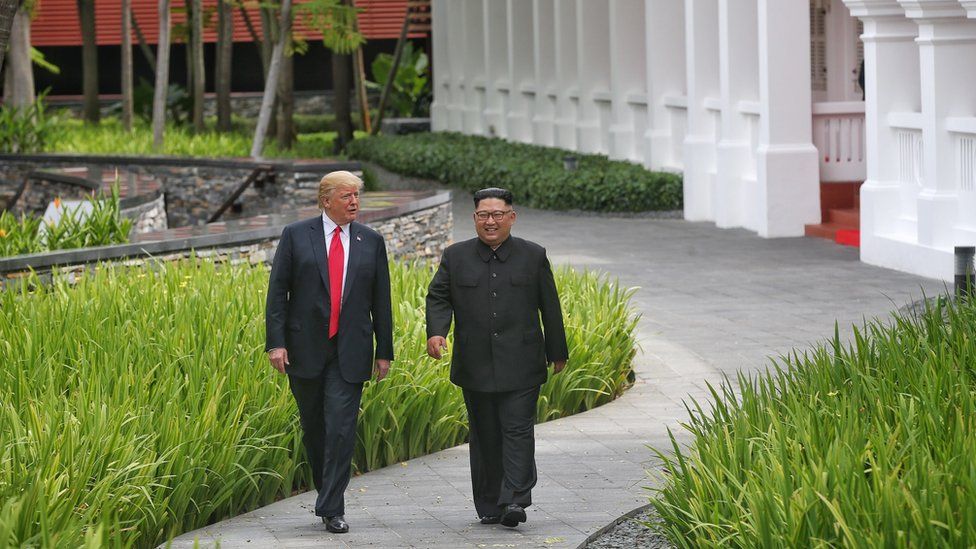 19.31
“Trump and Kim are gone. Thematic shots remain,” WSJ correspondent Jonathan Cheng reports from Singapore at night, posting on his Twitter cups of liquid in the colors of the American and North Korean flags. How the work on the denuclearization of the Korean Peninsula will continue, whether the US will suspend exercises in South Korea, whether luxury hotels will be built in North Korea – all this remains to be seen. Gazeta.Ru will, of course, follow the developments. All the best to you, friends, thank you for being with us!

19.21
Another funny moment – on the way from the meeting room of the Capella Hotel, Trump took Kim to his limousine and allowed (or forced?) to look in: The Associated Press reported that the American president made several hand gestures, after which the guards opened the door of an armored car. So Kim Jong-un was convinced that the presidential limousine is equipped with the latest security systems and high-end technology. How Kim Jong-un reacted to all this splendor is not reported.

19.12
In the meantime, we will also complete this wonderful holiday. Let’s remember the funny moments of the negotiations. Here, for example, is a photo of the pen that Kim Jong-un’s assistant prepared for signing the final document, having previously cleaned it – note that he puts it in place with gloves on.

A North Korean official holds a pen for North Korean top leader Kim Jong-un before signing a joint document with US President Donald Trump in Singapore, June 12, 2018.
Jonathan Ernst/Reuters
18.52
Singapore Foreign Minister Vivian Balakrishnan, closing this amazing day – it is now 11:52 p.m. in Singapore – on his Facebook page thanked his colleagues who worked to make the historic meeting between the President of the United States and the Chairman of the DPRK possible. “Often the employees of the Ministry of Foreign Affairs, who are engaged in the preparation of such visits, remain behind the scenes. I thought I might post some photos from our #MFAmily life! Thank you all”.

18.27
In the United States, Donald Trump’s joy over the past negotiations is not in a hurry to share. While Trump promises that Kim will begin the denuclearization of the Korean Peninsula in the very near future, experts are trying to understand where his promise to stop the “war games” will lead. Council on Foreign Relations President Richard Haas tweeted his concern over Trump’s “disturbing” statements at the press conference. “Unfortunately, @realDonaldTrump spoke of the US and Republic of Korea exercises as provocative war games. It is also worrying that he talked about the withdrawal of US troops without regard to reducing the conventional military threat from the DPRK. And suggestions that he did not notify the South Korean government in advance, if they are true, will be a blow to our ally.”

18.15
By the way, earlier Trump had already managed to talk with Greta Van Susteren, a correspondent for the Voice of America radio station, and told her that Kim Jong-un was “a fun guy, very smart and an excellent negotiator.”

18.10
While Trump is not disillusioned with Kim, he assures in an ABC interview that the US will develop relations with North Korea, and the country will become more open.

17.42
In an interview with ABC, Trump said that he trusts Kim, although he does not exclude that he will be disappointed in him in the future. “I trust him, yes. Maybe in a year you will be interviewed and I will say that I made a mistake. It’s possible. We’re dealing at a high level, a lot of things can change, a lot of things are possible,” Trump said.

17.36
Kim Jong-un, by the way, as a result, leaves Singapore later than Trump – he went to the airport only 10 minutes ago.

17.32
A possible deal with North Korea on the nuclear program is already being compared to the nuclear deal with Iran, from which the United States is withdrawing, Trump announced on May 8. But Trump has already said that it will not be “softer”. “I do not think that the agreement can be “softer”. At least we are not going to pay $150 billion,” Trump said in an interview with the ABC television channel, according to RIA Novosti. It is noted that $150 billion is the amount that the United States paid Iran from frozen accounts after the agreement was concluded.

17.11
UN Secretary-General Antonio Guterres, in connection with the recent US-North Korea summit, called on the world community to be patient. “The implementation of today’s and previous agreements, in accordance with the resolutions of the UN Security Council, will require patience and support from the world community,” the press secretary of the UN Secretary General said in a comment, according to RIA Novosti.

16.56
On the way from Singapore, Trump managed to talk on the phone with South Korean President Moon Jae-in, according to the South Korean news agency Yonhap. The South Korean leader thanked the American president for his efforts in achieving world peace. “President Moon said that President Trump has achieved great success at the North Korean-American summit, laying the foundation for peaceful coexistence not only on the Korean peninsula, but throughout the world,” said South Korean presidential spokesman Chong Wa Dae.

16.07
The results of the meeting between Trump and Kim are also causing a wary reaction among American politicians. Lindsey Graham, a Republican senator, said on Today, “Kim is gaining more influence. I think we’re getting stronger too.” He expressed “cautious optimism” in connection with the agreements reached, but the issue of the American military presence in South Korea is extremely acute for him. “The only thing I categorically disagree with is the withdrawal of our troops.”

15.43
Claiming that the North Koreans “managed to beat the Americans,” Valdai Club expert Andrey Lankov is not alone in his opinion. The New York Times columnist Nicholas Kristof, for example, claims that Trump was “turned around his finger” by forcing him to speak to Kim Jong-un as the leader of a nuclear power equal to the United States and to promise to suspend military exercises in South Korea, and this is exactly what North Korea is. achieves for decades. “With North Korea, the ‘very special bond’ that Trump says he has developed is as follows,” writes Nicholas Kristof. Kim forced the American president through nuclear and missile tests to accept North Korea as an equal nuclear power, provide North Korea with security guarantees, and cancel military exercises that the North has been protesting for decades. In exchange for these concessions, Trump seems to have received surprisingly little. In the joint statement, Kim only reaffirmed the same intention to denuclearize the Korean Peninsula that North Korea has been stating from time to time since 1992.”

15.15
Meanwhile, everything that Donald Trump talked about at the press conference is being discussed in the media and social networks. The South Korean Yonhap news agency found out from the US military contingent that it had not received new instructions regarding the suspension or termination of military exercises in South Korea, including the Ulchi Freedom Guardian exercises scheduled for this fall. The “war games” that Trump called “expensive” at a press conference and which he, according to him, intends to stop, so far no one is going to cancel.

14.59
Donald Trump left Singapore – according to the Singaporean newspaper Strait Times, he took off from the Paya Lebar airbase.

14.35
Former NBA player, basketball player Dennis Rodman, managed to cry in connection with the meeting between Kim Jong-un and Donald Trump on CNN. In an interview with TV presenter Chris Cuomo, Rodman, who is friends with the North Korean leader and often visits Pyongyang, said he received a call from the White House – according to him, Trump’s secretary called. “She called and said, ‘Dennis, Donald Trump is very proud of you. He is very grateful to you.” He added that he thought it had something to do with the North Korean talks. The tears were caused by a bitter memory: once Barack Obama was not serious about the basketball player’s attempt to convince him to achieve peace on the peninsula. 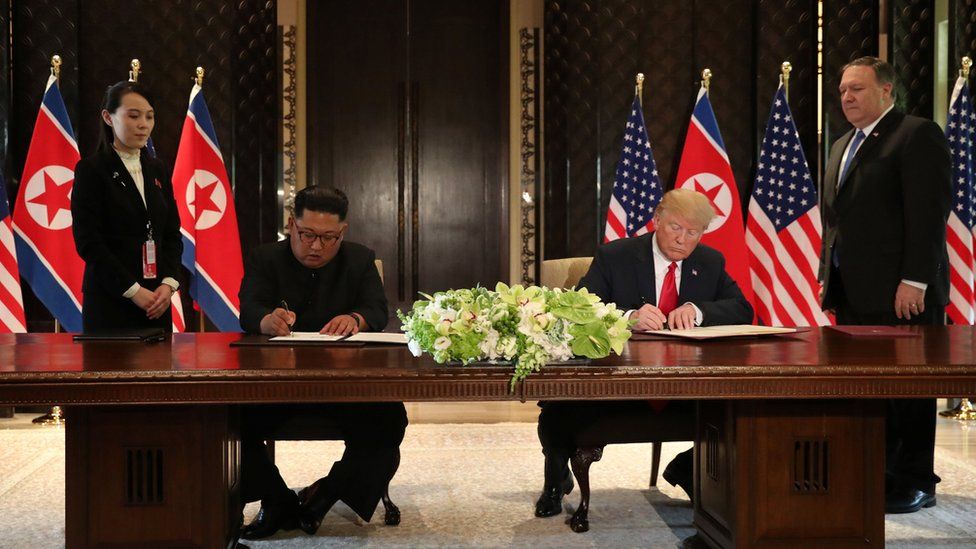 Meanwhile, WSJ columnist Jonathan Cheng posted Trump’s 2014 tweet dedicated to Rodman. “Dennis Rodman was either drunk or stoned when he said I wanted to go to North Korea with him. Good thing I fired him from The Apprentice,” Trump tweeted four years ago.

Dennis Rodman was either drunk or on drugs (delusional) when he said I wanted to go to North Korea with him. Glad I fired him on Apprentice!

14.05
Comments on the summit are now coming from Europe as well. Federica Mogherini, EU High Representative for Foreign Affairs and Security Policy, said the talks between Trump and Kim Jong-un showed that complete denuclearization of the Korean Peninsula can be achieved. “Today’s summit meeting between the President of the United States and the leader of the DPRK reaffirms our firm conviction that diplomacy is the only way to achieve lasting peace on the Korean Peninsula,” Mogherini said in a statement released on Tuesday.

13.58
Chinese Foreign Ministry spokesman Geng Shuang said at a briefing that Beijing would like to play a constructive role in helping to implement the agreements reached in Singapore.

13.46
Japan is, of course, ready to make its own efforts to relieve tension on the Korean Peninsula. “I would like to continue to make every possible effort in strong cooperation with the United States, South Korea, China, Russia and the international community to resolve various pressing issues around North Korea, in particular the issue of kidnapped Japanese citizens and the nuclear and missile issue,” he said. Japanese Prime Minister Shinzo Abe at his press conference.

13.29
Russia’s readiness to participate in the process of denuclearization of North Korea is confirmed by the Russian Foreign Ministry. “If a positive precedent is set for the denuclearization of the Korean Peninsula, we will not only welcome it, but we will, as before, in practical terms, provide maximum assistance both in terms of political support and in terms of putting forward specific proposals aimed at materializing these